One of the foundations of our Emerging Leaders Academy is the use of Gallup’s StrengthsFinder assessment. The intent is to offer participants some insights into their areas of strong natural talent that can inform their process of setting professional goals.

Why? Because of the benefits that flow to both the organization and the individual when someone is working from their strengths. The person themselves feels energized and engaged and is able to make significant contributions to their projects and teams. When people are working from their strengths they often willingly give 100% because it’s intrinsically satisfying to do so.

In this age of shrinking budgets and payrolls, those organizations where most people are working at the top of their abilities instead of slogging through their work at 50% will perform better and will be more competitive in keeping their best staff.

But people can land in what should be their dream job according to their strengths and still underperform despite all motivation they may have to do their best. What makes the difference?

Liz Wiseman and Greg McKeown offers some important insights about this in their 2010 book Multipliers: How the Best Leaders Make Everyone Smarter. As the title suggests, their extensive research and interviews with executives in companies around the world led them to identify the characteristics of managers they call Multipliers. These managers do more that just accomplish more with less. They get more by using more of people’s intelligence and capability and make them excited to contribute at 100%–or even more when they bring out abilities people didn’t know they had.

The authors contrast Multipliers with Diminshers, those leaders who stifle others largely due to their beliefs about the limitations of the people who work for them. Here’s how they describe the mindsets of these two types of leaders:

The Diminisher’s view of intelligence is based on elitism and scarcity; intelligence is thus a scarce commodity. Further, they see intelligence as static, that it doesn’t change over time or circumstance. As the authors note, their logic seems to be “people who don’t get it now never will; therefore, I’ll need to keep doing the thinking for everyone” (19). With this approach, they can easily create environments where people are, paradoxically, both overworked and underutilized.

Multipliers, however, have a rich view of the intelligence of the people around them and see it as continually developing. They assume that people are smart and can figure things out, and that they are smart in unique ways so can make important contributions and will get even smarter in the process.

Clearly, these two mindsets lead to very different ways of interacting with and directing others.

Wiseman and McKeown’s interviews with people who’ve worked for both types of managers in the same organization has led them to assert that Multipliers can do more than twice as much with the same level of resources because they bring out the best efforts and ideas in those who work for them. Importantly, the authors note that Multipliers do this not with some sort of touchy-feely approach but by driving their people to do their best–and creating circumstances that allow them to do so.

Among the findings of their research that surprised them, Wiseman and McKeown point to the fact that most Diminishers are what they call “Accidental Diminishers” who are not aware of the restrictive impact they have on others. Most of them “had grown up praised for their personal intelligence and had moved up in management ranks on account of personal–and often intellectual–merit. When they became “the boss,” they assumed it was their job to be the smartest and to manage a set of “subordinates”” (25).

That is, these Diminishers imitate what they have observed others do. It simply never occurs to them that more could be achieved by leveraging the strengths and intellects of those on their teams–because they don’t believe there’s much there to leverage.

The book is particularly compelling because of the way it dovetails not only with Gallup’s extensive research into working from areas of strength but also with the insights from work on emotional intelligence and the need for self-knowledge and self-management before one can build effective relationships with others.

Leaders must have the self-knowledge to recognize what effects their actions have on those around them if they are to be bring out the best in people. Multipliers suggests that they must also believe in what is present in others, waiting to be brought out.

“No service without proper ID!”

“No Outside Food or Drink.”

“DO NOT DISPOSE HYGIENE PRODUCTS IN THE TOILET.”

“Absolutely NO PARKING in this area.” 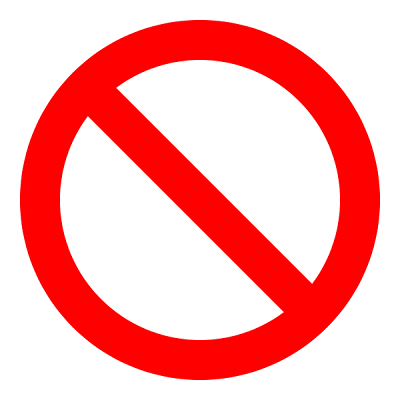 All government offices are filled with people whose work is, ultimately, about serving the public. But some offices serve the public more directly by providing direct service to customers who physically walk in the door.

Unfortunately, not all of the signs posted to communicate with those customers are written with the customer in mind. Instead, many are phrased in ways that highlight frustrations of staff.

While this is true of many businesses, too–just think of all the “NO” signs on the entry doors to some establishments–in those cases the customer is free to go to a competitor. In the case of government offices, the customer probably has no choice but to use that office and that service. When we greet people with signs that essentially say “here’s what we expect that you’ll do wrong and we find it very annoying so don’t,” there’s a huge missed opportunity.

Instead, we could write our signs in a reader-centered way to create a more positive impression of government services and the staff that provide them. Invite your customers to positively participate in what your agency is trying to accomplish.

“Please have your ID available so that we can assist you today. Acceptable ID includes…”

“Please help us maintain the plumbing by not disposing of hygiene products in the toilet.”

“Your patronage of our concession stand helps pay for pool maintenance.”

“We’re sorry you have to wait in line. If you use this time to make sure you have these 3 forms prepared, it’ll help us serve you more quickly.”

“Public parking is available behind the building.”

Once you’ve assessed the messages you’re sending to the public, you might also review the signs posted for staff and see whether some new wording might improve the tone of the workplace.